By tinyindiangirlupamountain / April 21, 2013 / The Trek, Travel / Leave a comment

Back to the diary…

Wow, what a day!  I’m trying to figure out the best way to put into words how amazing today has been.  After the no starter yesterday, I went fully into London mode-‘I’ll believe it when I see it’.  Last night we held something like a ‘summit meeting’ where in the end we summoned the manager of Himalayan Encounters to the hotel.  Plan A was ‘turn up at the airport and see how it goes’.  Plan B had been, ‘We’ll deal with it after’.  I don’t think the group as a whole were happy with the whole ‘see how it goes and deal with it after’ chat, hence the summit.

So, the manager came (knew who I was after the whole missed flight incident) and 3 of the group negotiated a deal for helicopters for today.  The last I knew we had 2 helicopters with one still trying to be sorted, costing $250 each, and that was just one way.  I was sort of having palpitations about the money but thankfully our flight to Lukla left today!  Hurrah!  It wasn’t on time of course but who cares.

Yesterday, when we turned around, it was that horrible moment when you can’t believe it, disappointed but also the realisation that they had probably made the right call given that we couldn’t even SEE out the windows.

So when we didn’t go, it was a strange mix of feelings.  Part of me hadn’t even got my head around the fact we were going and then part of me was TRYING to get myself psyched for the ‘walk to Everest Base Camp’.  So when today came, it was that sinking feeling again of, ‘Oh my god, what the hell am I doing?!’

When we finally got to Lukla it was more than anything I could have ever imagined.  The plane was absolutely fine, I don’t know why people freak out about it but I pretty much trusted the pilots completely.  The landing strip was literally 2 lines and a dead end.  It was a fantastic landing. 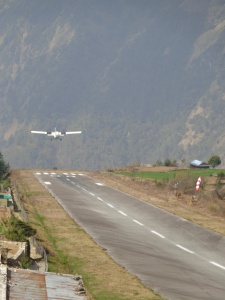 Take off from Lukla after dropping us off

The airport was of course small, but the scenery was amazing.  Nepali people dotted all along the mountain and as for the mountains themselves, I can’t even describe it. 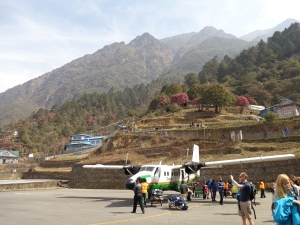 Lukla itself is so full of character.  It was the kind of thing where it was probably what I would have expected Kathmandu to be like.  So beautiful, really simple, very old world and untouched.  It was magic.  And you could really feel the smiles growing around the group.

We had tea at this beautiful little tea house where we discovered 2 bags and Chitra’s box of goodies had not arrived (the weight restrictions had been changed to 10kg per bag).  Thankfully it turned up about 6pm.

After tea, we made our way to Phakding.  It was a decent climb at times with regular breaks and a good pace. 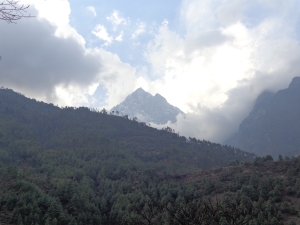 The tea house we’re staying in is far from basic.  Good clean toilets, an amazing dinner menu, clean and comfortable dorms and good all around banter.

…Just spent a lovely couple of hours with a few members of the group and met 3 Ozzy dudes (one who is very rude) and 2 other people on a Himalayan Encounter tour also.  Great fun and lots of fab stories.  One guy is an absolute hoot, some of the things he comes out with crack me up something shocking.  The best one is how he got concussion and had a short-term memory of 45 seconds.  The guy in the hospital bed opposite was in traction having broken both his legs and this guy kept saying to him – ‘Oh my god, that looks like it really hurts, what happened?!’  ‘Run over by a fork lift’.  Repeat ad infinatum.