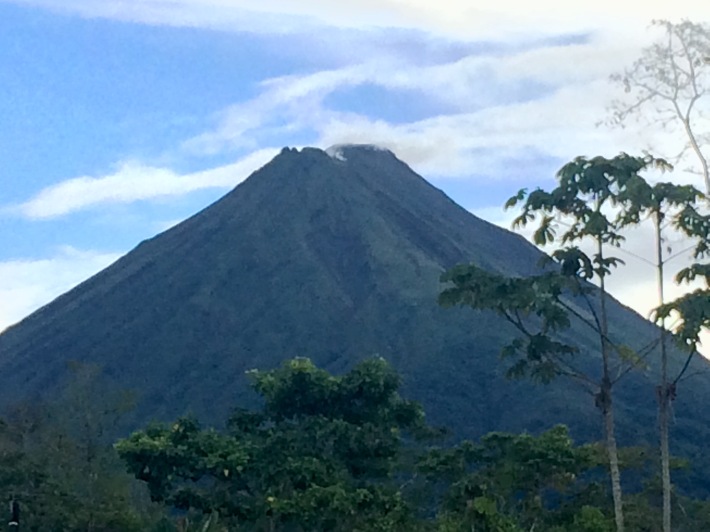 I am at peace.

Sitting on a giant bus, winding my way through the greenery, I am on the move once again.  San Jose to Puerto Viejo de Talamanca, on the Caribbean coast of Costa Rica.

I was told on the plane by a man in oil who spoke fluent Spanish and then fluent English that the Pacific coast was better.  But after doing some reading and speaking to the locals, I realised if I didn’t go Carribean I’d definitely be missing out.

The history behind Cahuita and Puerto Viejo and all things east coast is a fascinating one.  Minor Keith, an American contractor, hired droves of migrant workers to complete a large conscript for a railway which sadly for him and his workers resulted in a huge loss of life.  Yellow fever.

Today you can get one jag for Yellow Fever and you are vaccinated for life.

After his first wave of workers died, he employed 10,000 Jamaicans and Barbadians to work on the trainline instead hoping they had some level of immunity.

In addition to the train line, he set up the first banana plantations as a means to fund the railway initiative.  Ironically it was this lucrative side business which saw him through to his retirement and beyond.

Even the allure of the ‘less good’ beaches called me.  Different food, different waves, different kinds of people. 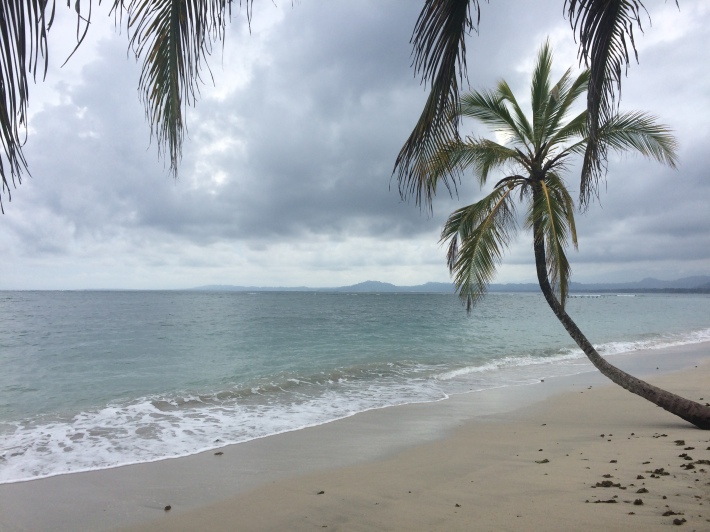 The bus is hot, someone has a knee against the back of my chair, I’m drugged on a travel sickness tablet and torn between wanting to see the world and wanting my heavy lids to fall.

Margaret Atwood has kept me company so far, as has my friend L who lives and works in Costa Rica.

One particular paragraph captures my attention.  I am not sure why, but it fits my purpose for now and for that reason I’ll share it with you:

Night falls.  Or has fallen.  Why is it that night falls, instead of rising, like the dawn?  Yet if you look east, at sunset, you can see night rising, not falling; darkness lifting into the sky, up from the horizon, like a black sun behind cloudcover.  Like smoke from an unseen fire, a line of fire just below the horizon, bushfire or a burning city.  Maybe night falls because it’s heavy, a thick curtain pulled up over the eyes.  Wool blanket.  I wish I could see in the dark, better than I do.

L and I spent a short but very relaxing few days up north at La Fortuna, where we boiled in the humidity of the valleys of Volcan Arenal.  Last bubbling back in 2010 all 3 volcanoes of Costa Rica have recently started brewing again.  Though no lava flows, the top hat steams in anticipation.

We continue cooking ourselves in the hot springs jumping into the cool pool when the temperature gets too unbearable for our temperate blood.  My favourite was the one I called ‘Aladin’s cave’.

There was much more to do in La Fortuna, but our primary goal was to keep an even pace. 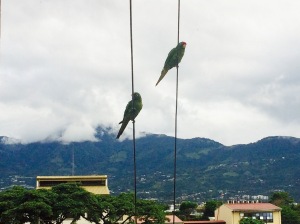 Much of this trip has been spent on buses.  Much of it still will.

Still, as I navigate the ticket stand on very basic Spanish I think, I love this.  I love everything about this.  There are no rules and I am free.  All I have to do is sit here and life will happen.  I feel alive.  I feel remote.  I feel lost in a perfectly found way.  I am home.