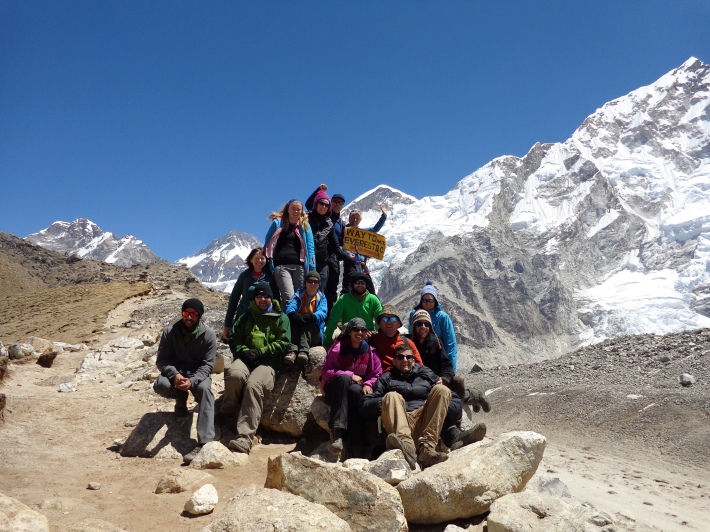 Yesterday was base camp day, and I didn’t make it.  I made it all the way to Gorek Shep (the place of the goats) with paraesthesia of the face (my whole entire bloody face) which GP lady told me was secondary to the Diamox.  I actually think I felt worse ON than OFF the Diamox.  I got the sticks out as really I didn’t think I was going to make it without them.  I can remember thinking, ‘I don’t know if you’re going to make it today.  It’s a long day and you actually feel like shit.’

It was a long day.  Our total ascension was only ~400m but it was hard going.  At one point, all the demons in my life took form.  Perhaps this is what oxygen deprivation does to your brain?  Allows you to witness the worst parts of your life so that once you regain perfusion you realise, life’s not so bad after all.  Perhaps.

I kept going and at Gorek Shep my head hurt, my face was still buzzing, my hands tingled and everything, even putting on gloves, was an effort.

I crashed.  I slept into G and could hear the commotion to get keys and bags but just couldn’t move.  Somewhere around me, I know GP lady was feeling the same.  Nausea, vomiting, just that general feeling of shit…

When I remember where we are I’ll tell you, about 4000m.  We are at one of the tea lodges that we stopped at for lunch on the way up.  In several hours the rest of our group return.  I’m doing that thing where I can’t stop looking out the window, as if me looking is going to bring them faster.  I really missed them all yesterday.  It kind of made me think how transient all of this is and what will remain after…

Lunch over.  So where was I?  Oh yes, feeling like shit.  I tried to order lunch, garlic soup and milk tea.  I knew I needed to eat to get some Ibuprofen in me.  At that point, the 2 hour ascent just seemed too much.  My will was cracking.  Gorek Shep was 5182m with Everest Base Camp being 5364m, almost 200m.  There was no way I could have done it.  Chitra appeared out of nowhere with a sats machine.  66%.  66%.  I’m going to say it again – 66% oxygenation!  And a resting heart rate of 125.  I think my body had started to die (ok, mild exaggeration).  GP lady also had hers done – something like 72%.  Then she vomited, into a cup, a bowl and a basin.  My sandwich bag was rightfully discarded.  I had my Ibuprofen, maybe too little too late.  And then came the telling off from one of the guys-

‘What would you do?’

‘Takes one to know one.’

‘What would you tell me to do?’

Chitra came back and a plan was made.  We would go to the sign that said, ‘Everest Base Camp This Way’ and take pictures as a group.  I remember asking Chitra, ‘Do we get to go down on a donkey?!’ (Couldn’t hurt to try eh?).  ‘No, Pemba will go with you’.  Yaaay!  Pemba!  He’s totally the bomb.

So there we went, to the sign and I swear to God even the thought of descending and feeling human again filled my body with life.  I remember at one point one of the guys asking me, ‘How do you feel?’.  My reply, ‘Pretty much how I look.’ 🙂

So we walked to the sign, we took our photos and said our Goodbyes.  Actually I really was so happy.  There was something really special in that moment, a real sadness that GP lady and I couldn’t go on but also a camaraderie that we had all at least made it this far together. 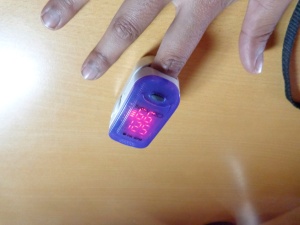 A picture speaks a thousand words