In Pemba’s able hands we made it 900m down to Periche by about 1730.  25 km we had walked, he tells us.  My face had already started to feel better, just some odd nasal tingling, not much else.  I guess it really was the altitude and not just the Diamox.  GP lady was also starting to look better.  We had cheese pizza and ‘finger chips’ for dinner – it hit the spot, as did the tabasco sauce.  After a brief spell chatting to three Indian female climbers who were taking 65 days to climb Everest, I hit the hay.  A standard night of hacking all night and a late start later, we had veg omelette for breakfast and milk tea.  GP lady and I then wanted to visit the Himalayan Rescue Association – for ‘Professional’ reasons (for some seriously bizarre reason Pemba found this word hilarious, wish I could say it to you than just put it in inverted commas) but also to try and suss out the best way to get a decent sats probe for Chitra.

Everest Memorial Sculpture outside the Himalayan Rescue Association.
The Plaque reads:
‘The Everest Memorial Trust was founded in 1993 by a group of British climbers after a successful Everest attempt. The intention of the founding Trust members was to improve the hospital at Pheriche. Then following a series of deaths on Mount Everest in 1996, they decided to commission a memorial sculpture, to celebrate the climbers’ exuberant ambition. The result was the Everest Memorial Sculpture, made by Oliver Barratt, which is a monument to the people who have died while climbing on Mount Everest.
The sculpture is 2m high and made of stainless steel. panels are strapped around a frame and rocks collected from the mountain fill the inside. The piece was made in England in 2002, travelled to Kathmandu January 2003, flown to Lukla and finally was carried to Pheriche where it was installed in April 2003.
It is modestly monumental. Not enormous but a tightly bound cone, whose surface is a strong and beautiful skin. Not trying to compete with the mountains but instead reflect them.
The space between the two halves is like a crevasse or doorway or hiding space. In there you are forced close to the names of the dead, and the closeness feels like a kind of intimacy.’
A very humbling experience, I can tell you.

It was cool to have used our time in Periche to get a little medical insight.  Everything they have is given for free, donated I guess the word is.  They have an examination room (with ECG.  They were very excited by this latest donation from some Aussies), a medicine cabinet/room and a really cute 2 bedded in-patient unit.  It was really nice of the doctor, Hilary (Boston, USA) to take the time to show us around and give us some advice on sats machines.  I learnt that to volunteer at the Himalayan Rescue Association there is a waiting list of more than 3 months, such is its demand. 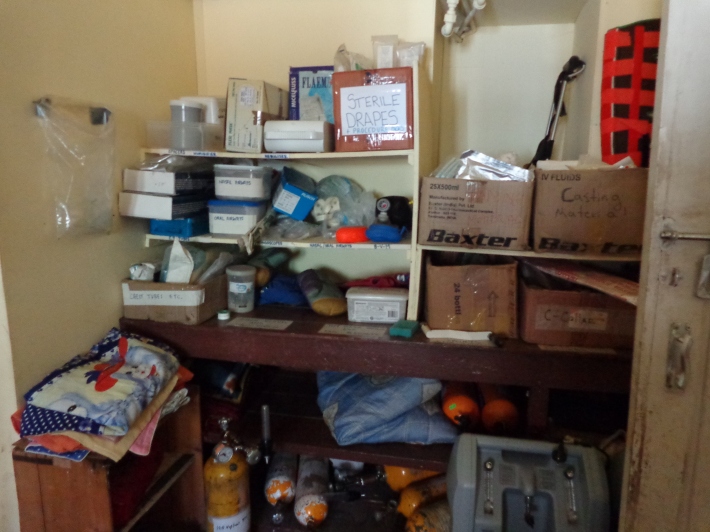 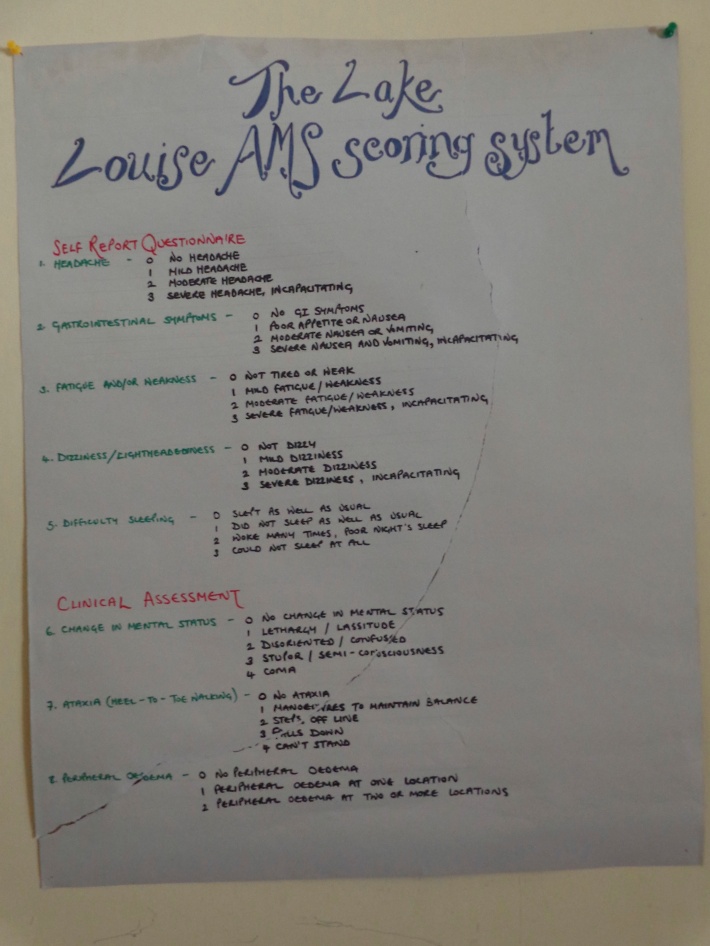 Scoring system for Acute Mountain Sickness. Take the time to zoom in. You never know, it might save your life one day. 🙂

We then descended to Orso with the three of us, Pemba, GP lady and myself in great spirits.

Before I forget, I think I am in the company of a famous man, Rodrigo from Brazil.  He has a book in Portuguese which sold over 7,000 copies and he has summited Everest 2x previously.  This is his 4th expedition.

Anyway, to continue.  We had great fun making our way from Periche to Orso.  Singing, listening to songs on Pemba’s phone, taking pictures at suitable picturesque points.  I was made to jump and do cartwheels. 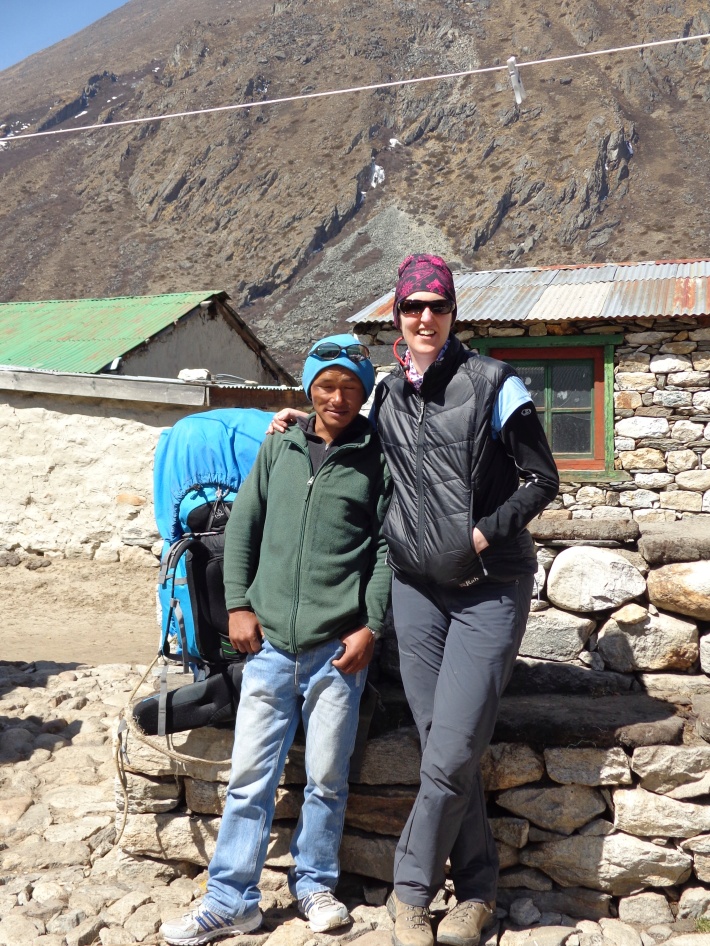 Meet Kamal Thama, our porter who had not only gone all the way to Gorek Shep, but then had to make the 900m descent to Pheriche with both our massive rucksacks. Many thanks Kamal Thama, we’d be lost without you.